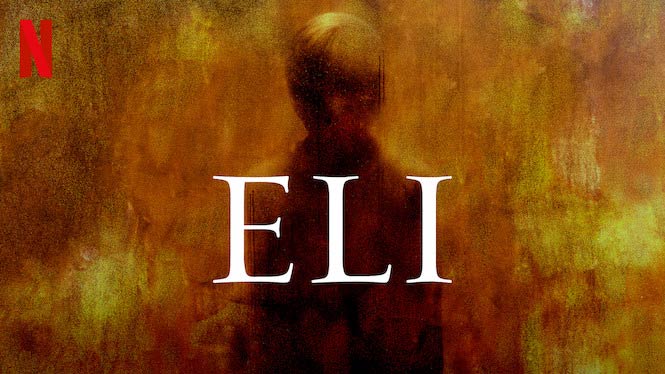 A boy becomes trapped in a haunted house while undergoing treatment for a rare disease.

The setting and overall feel of this movie was eerie and mysterious. The filmmakers excelled in creating this atmosphere in every way possible. However, this movie felt like two different contrasting films in one and I felt there were inconsistencies with the story and characterizations.

My biggest complaint about this film was the lack of foreshadowing and clues given. Up until the last 30 min of the movie I thought the movie had a psychological approach of Eli’s mental state, and whether or not he was actually seeing things. I did not see the ending conflict of spirituality, nuns, and the devil coming into play.

The only foreshadowing I really saw was the disconnect between Eli and his father, making it apparent that their is some kind of strain on their relationship. It was also apparent that Eli’s mom was overly religious and that there was something off about the young girl who came to visit Eli. However, it was really hard to put these clues together in order to decipher the plot twist at the end of the film and it still totally comes out of nowhere.

The main inconsistency within the characters I found was the mother’s choice in trying to get Eli to leave toward the end of the film. She clearly is not aware that the Dr. will most likely kill her son in the third phase of her plan, but she transitions from desperately getting him to leave to convincing him to stay, and then helping him leave again. It was just too back and forth for me and didn’t stay consistent to the plot and her development as a character.

This film also had a lot of references to other well- known films. For example with Eli’s name being lie spelled backward I got very strong Shining references. And the whole plot twist of Eli being a spawn of Satan reminded me a lot of Rosemary’s Baby. Which felt a little predictable and unoriginal.

The camera work and transitions between shots was very visually pleasing, and I really enjoyed watching this film from a production standpoint. I really liked the use of mirrors and spirits to create an intense feel of suspense, and it definitely had me sitting on the edge of my seat. Overall, this wasn’t a bad film and all of my issues with it are plot centered.

Synopsis After floating in space for 57 years, Lt. Ripley’s (Sigourney Weaver) shuttle is found by a deep space salvage team. Upon arriving at LV-426, the marines find only one survivor, a nine year old girl named Newt (Carrie Henn). But even these battle-hardened marines with all the latest weaponry are no match for the hundreds…

Synopsis In deep space, the crew of the commercial starship Nostromo is awakened from their cryo-sleep capsules halfway through their journey home to investigate a distress call from an alien vessel. The terror begins when the crew encounters a nest of eggs inside the alien ship. An organism from inside an egg leaps out and…

The first thing that caught my eye with this film was its exquisite costume, and set design. Within the first few minutes of the film I felt transported back in time, and the acting played a huge part in this as well. The chemistry between the March sisters added a lot of depth to the film, and the sisterly bond between them came to life on the screen to create an overwhelming sense of nostalgia.
The story-line of this film kept me entirely interested throughout the entire movie. The three things that stood out to me the most about this film were its well-developed characters, dynamic acting, and subtle use of symbolism. It was also extremely heart wrenching and touching to watch Clint Eastwood act in his last film as a modern “cowboy.”
My top 5 favorite directors and my top 3 favorite films from each one. It was hard to pick just five when there are so many talented directors. But I think these five have had amazing impacts on the film world. Who is on your list?
The plot line of this film had me engaged within minutes, and my attention did not waver until the end of the film. Even days after watching this film I am still dumbfounded and astonished by Anthony Hopkins performance. Jodie Foster does an incredible job as well, and the two clearly mastered the acting technique of completely bringing the characters they were cast to life. The thing that stood out to me the most in this film was the unique transitions and editing. The Films use of parallel editing was pulled off both effectively and effortlessly. Rating 9.5/10
This film is incredibly hard to watch, and there were several moments I felt extremely angry and sad as to what was occurring in the film. However, I believe this is a film everyone should watch at least once in their life. Not only is this an astonishing well-made film, but the message behind it is especially powerful. This film teaches the genuine and beautiful message that people don’t just deserve the capacity to survive, but to live.
With the world being such a crazy place right now, I have definitely found myself watching more movies. So I decided to compile a list of a few of my favorite films I have watched this summer so far, along with a few films I find gravitating toward every summer. It was definitely hard to pick just five perfect summer films, but these are the ones I have been gravitating towards the most recently. What your your go to summer films?
Loading Comments...
%d bloggers like this: