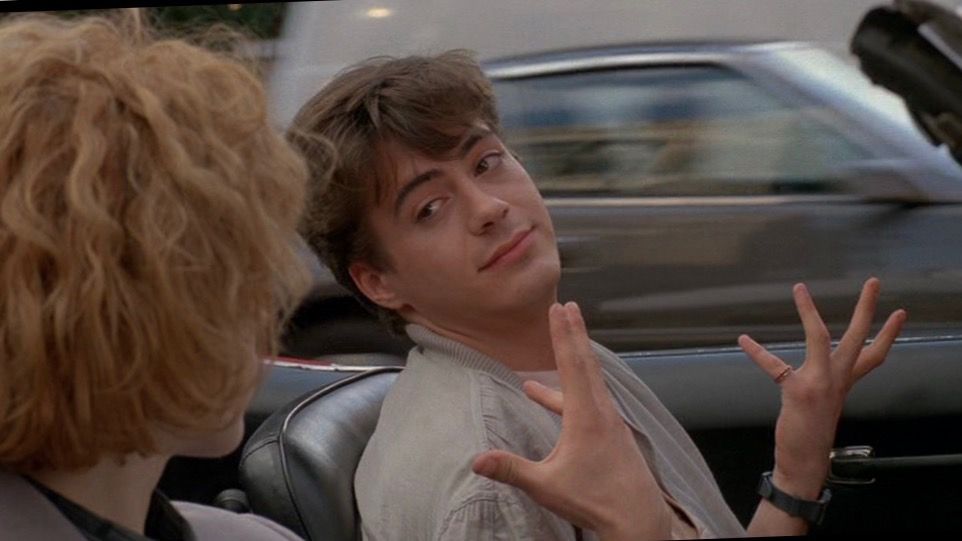 Serial pick-up artist and commitment-phobe Jack Jericho (Robert Downey Jr.) takes lessons in the art of seduction from aging player Phil Harper (Danny Aiello). Jack finds a formidable opponent in Randy Jensen (Molly Ringwald), a fiery tour guide who has a retort for his every line. Though she initially spurns his advances, Jack finds a way in when Randy’s alcoholic, compulsive gambler father, Flash (Dennis Hopper), ends up in serious debt and deep trouble with gangsters in Atlantic City.

I have seen nearly every Molly Ringwald film from the 80s, and when I first stumbled upon this particular film, I was curious why I had never heard of it. Well now I know, it’s because this movie is awful! With a cast of Molly and Robert Downey Jr. I thought this would be a phenomenal film, and while the acting was mostly impressive, the writing was AWFUl. The actors tried their best to make a badly written script better, but the plot was still all over the place and pointless. This was definitely a film I had to force myself to watch all the way through.

I’m not sure why this film is even called the pickup artist because twenty minutes into the film Robert Downey Jr’s character already falls for the girl and gives up his player lifestyle. Instead, this film is less of a romantic comedy and more of a gangster film, in the sense that Ringwald’s dad owes a gang boss some money and Downy Dr. vows to help. This is the fundamental conflict of the film, and it has nothing to do with the lighthearted pickup comedy I thought this film would be.

The plot of this film was so confusing as a whole. In the film Downey mistakes Ringwald’s father for her boyfriend, and she doesn’t correct him till the end of the film. With how all over the place and inconsistent the plot was, I honestly found myself confused if this character was Ringwald’s dad or boyfriend. This is just one example of how the plot was a little confusing and inconsistent.

After watching this film, I did some research into its background. I found out that the writer/ director was trying to tie in roles the actors had played in other films into this one. Which is why I think this film did so well during its release in the 80s? Because the audience understood its references. However, the film has definitely not aged well, and this just made it hard for a modern day audience to follow.

One impressive thing about this film was the soundtrack. From the first song, the soundtrack was transformative and brought me back to the 80s. However, overall the audio recordings of this film were very sub par. Several times the audio was quiet and hard to hear compared to the background music, and there was lots of background and white noise.

END_OF_DOCUMENT_TOKEN_TO_BE_REPLACED

The first thing that caught my eye with this film was its exquisite costume, and set design. Within the first few minutes of the film I felt transported back in time, and the acting played a huge part in this as well. The chemistry between the March sisters added a lot of depth to the film, and the sisterly bond between them came to life on the screen to create an overwhelming sense of nostalgia.
The story-line of this film kept me entirely interested throughout the entire movie. The three things that stood out to me the most about this film were its well-developed characters, dynamic acting, and subtle use of symbolism. It was also extremely heart wrenching and touching to watch Clint Eastwood act in his last film as a modern “cowboy.”
My top 5 favorite directors and my top 3 favorite films from each one. It was hard to pick just five when there are so many talented directors. But I think these five have had amazing impacts on the film world. Who is on your list?
The plot line of this film had me engaged within minutes, and my attention did not waver until the end of the film. Even days after watching this film I am still dumbfounded and astonished by Anthony Hopkins performance. Jodie Foster does an incredible job as well, and the two clearly mastered the acting technique of completely bringing the characters they were cast to life. The thing that stood out to me the most in this film was the unique transitions and editing. The Films use of parallel editing was pulled off both effectively and effortlessly. Rating 9.5/10
This film is incredibly hard to watch, and there were several moments I felt extremely angry and sad as to what was occurring in the film. However, I believe this is a film everyone should watch at least once in their life. Not only is this an astonishing well-made film, but the message behind it is especially powerful. This film teaches the genuine and beautiful message that people don’t just deserve the capacity to survive, but to live.
With the world being such a crazy place right now, I have definitely found myself watching more movies. So I decided to compile a list of a few of my favorite films I have watched this summer so far, along with a few films I find gravitating toward every summer. It was definitely hard to pick just five perfect summer films, but these are the ones I have been gravitating towards the most recently. What your your go to summer films?
Create your website with WordPress.com
Get started
Loading Comments...
%d bloggers like this: